Your online source for all things Jodie Comer

Category: The End We Start From

Articles & Interviews The End We Start From

No comments
by Ann

Benedict Cumberbatch (Doctor Strange in the Multiverse of Madness) and Mark Strong (1917, Kingsman) will join the Jodie Comer-starring apocalyptic thriller The End We Start From. Both are also attached as executive producers on the film, whose principal photography has begun in London, and you can see a first-look image of Doctor Foster and Killing Eve star Comer in action below.

Based on Megan Hunter’s novel and adapted by Bafta-nominated Alice Birch (Normal People, Succession), The End We Start From is billed as “a powerful hopeful story about the trials and joys of new motherhood in the midst of devastating floods that swallow up the city of London.”

Deadline had first news of the hot package back in May, when Anton and UTA Independent Film Group geared up to launch worldwide sales at the Cannes Film Festival. We also revealed Katherine Waterston (Fantastic Beasts, The World To Come) would appear opposite Comer last month.

Cumberbatch’s SunnyMarch is among the shows producers, alongside Hera Pictures. 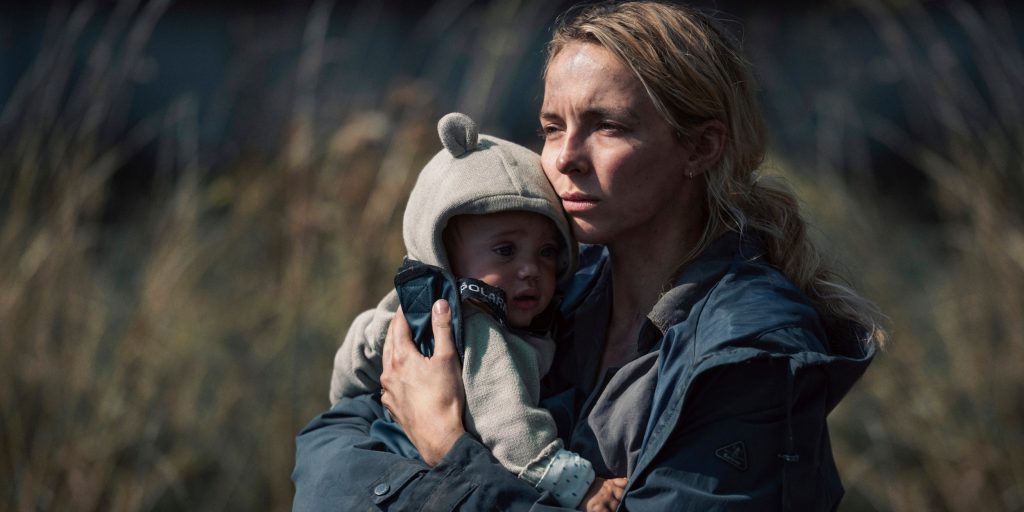 Articles & Interviews The End We Start From

Collider: Jodie Comer to Star in Film Adaptation of Apocalyptic Thriller ‘The End We Start From’

No comments
by Ann

The star recently won her second BAFTA for the British drama ‘Help.’

Deadline has reported that Killing Eve star Jodie Comer is primed to star in a new end of the world thriller titled The End We Start From, from director Mahalia Belo and executive producer Benedict Cumberbatch. The film is said to be a feminist survival story set in London during an environmental crisis and focuses on a young family torn apart in an apocalyptic flood. Comer will play the mother of a newborn baby as she attempts to navigate the treacherous waters and return home.

The news comes just off of Comer’s second BAFTA win for the British drama film Help. Comer is a highly regarded actress and has a long and impressive list of accolades to show for it. She is most prominently known for her roles as Villanelle on the highly-rated thriller series Killing Eve, Rey’s mother in Star Wars Episode IX: The Rise of Skywalker, Marguerite de Carrouges in The Last Duel, and can also be seen as Millie Rusk in Free Guy starring Ryan Reynolds. Other cast details for the film are still unknown, however, having Comer officially cast as the main character in the film will undoubtedly get fans excited.

The End We Start From is adapted from Megan Hunter’s 2017 critically acclaimed novel of the same name. It will be directed by Belo, who is most prominently known for her work on 2018’s The Long Song and Requiem, and will use a script from highly acclaimed British screenwriter Alice Birch, who has done work on HBO’s comedy-drama series, Succession.

The producers all seem to be very excited to be part of the new project, stating:

“The End We Start From is very close to our hearts. Megan’s heart-wrenching novel, and Alice’s wonderful adaptation, present a story about motherhood, separation, social and environmental upheaval, and those primal instincts in us which draw moments of joy and inspiration out of the chaos. We are incredibly excited to have Mahalia and Jodie lead this talented creative team in making what we know will be a resonant, riveting film.“

Gif of the Moment

View All | Be Affiliate

Jodie Comer Network at jodie-comer.net is an unofficial fansite. We have no contact with Jodie, her friends, her family, representatives, etc. This site is made by fans for the fans. All images in the gallery belong to their respectful owners and no copyright infringement is intended. All content and graphics are copyrighted to SAK unless otherwise noted.

© 2016 Jodie Comer Network | Hosted by Flaunt Network | Privacy Policy | DMCA
Theme by Sin21 | Header by Ann | Back to top | Home
Jodie Comer Network at jodie-comer.net is an unofficial fansite.
We have no contact with Jodie, her friends, her family, representatives, etc. This site is made by fans for the fans. All images in the gallery belong to their respectful owners and no copyright infringement is intended. All content and graphics are copyrighted to SAK unless otherwise noted.